H. H. Gopal Krishna Goswami Maharaja after graduating from the University of Delhi, studied Business Management at the Sorbonne University of Paris on a scholarship from the French Government and later, obtained a Masters Degree in Business Administration from the McGill University at Montreal.

Having received an intimation from His grace Mahapurusa das, the than President, ISKCON, Montreal that His Divine Grace A.C. Bhaktivedanta Swami, Srila Prabhupada, Founder Acaraya, ISKCON shall be arriving in Montreal on June 1, 1968, H. H. Gopal Krishna Goswami Maharaja arrived there on 30th May. After the kirtana, H. H. Gopal Krishna Goswami Maharaja enquired if he could render some service, and he was immediately sent to clean Srila Prabhupada's apartment.

"I was fortunate to receive this as my first assignment in devotional service", Maharaja said. He cleaned the doors, shelves and windows of Srila Prabhupada's apartment. In this way, Gopal Krishna’s service attitude for Srila Prabhupada was manifested even before he actually met him.

In fact, around December 1967, H. H. Gopal Krishna Goswami Maharaja had started visiting many Hindu temples, gurudwaras and churches, in his search for the Absolute Truth or God. Every Sunday, he would seek out a different church, temple or gurudwara, and would spend the whole day there.

Srila Prabhupada was always sympathetic and extra-merciful to Indians, but of all the Indians who came to hear him, young Gopal Krishna was very special. While all the other Indians would offer obeisances and sit for a few minutes, H. H. Gopal Krishna Goswami Maharaja was the only Indian who would come regularly and sit right till the end of the lecture.

During the three month period that Srila Prabhupada stayed and lectured in Montreal, H. H. Gopal Krishna Goswami Maharaja spoke, "Of course, I did not know the importance of hearing at that time, but my only small qualification was that I was very respectful to Srila Prabhupada from the first day I saw him, and I would stay for his lectures till the end, and leave only after he had left the temple".

Around that time, he was working for Pepsi-Cola, doing Marketing Research. Srila Prabhupada started taking great personal interest in him, and would talk to him almost every day. Since then, both of them started a regular correspondence, with Srila Prabhupada writing as many as three long letters every month. Thus, a very intimate guru-shisya relationship had already begun to establish.

On May 27th, 1969, Srila Prabhupada wrote to say, "As your name is already Gopal Krishna, there is no need for changing it. You will now be known as Gopal Krishna das." H.H. Gopal Krishna Goswami Maharaja was only 25 years old then! 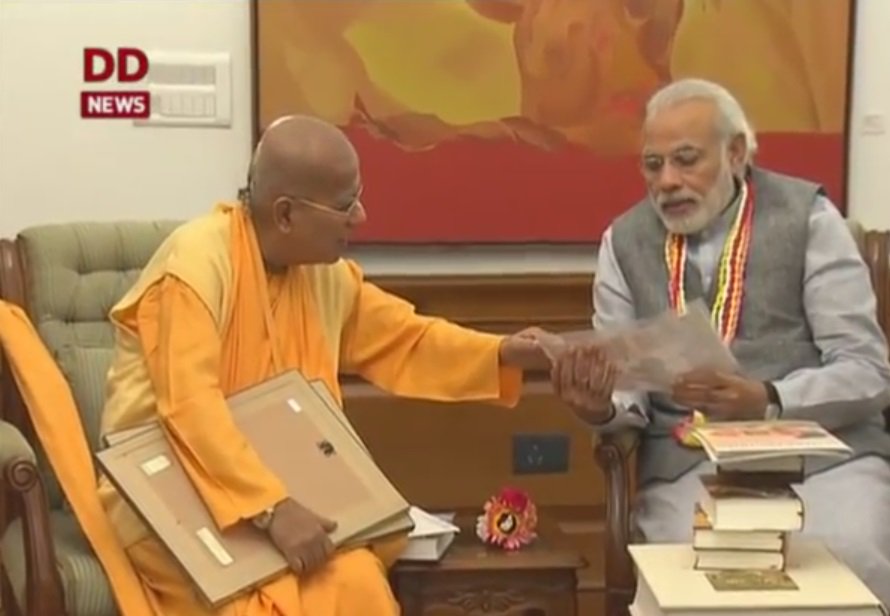 Later on, H.H. Gopal Krishna Goswami Maharaja moved into the temple and engaged himself fully in the service of Srila Prabhupada. For many years, he acted as Srila Prabhupada’s personal secretary.

"Srila Prabhupada was anxious that book-printing in India should expand", says H. H. Gopal Krishna Goswami Maharaja. "During my first two years, he would press me again and again to print more and more books." H.H. Gopal Krishna Goswami Maharaja said, "that Srila Prabhupada was especially pleased when he presented him copies of the First Canto of Srimad-Bhagavatam in Hindi".

Srila Prabhupada encouraged him to utilize his talents for selling his books as widely as possible. "Now you can utilize your knowledge of marketing for Krishna's service, idam hi pumas tapasya srntasya va, svistasya suktasya ca buddhi dattayo. This is the perfection of education."

In 1976, Srila Prabhupada appointed H. H. Gopal Krishna Goswami Maharaja as G.B.C. for Russia. He made several trips to Soviet Union, a communist state (now called the Commonwealth of Independent States) and risking grave dangers, he preached and distributed books over there. On the instruction of Srila Prabhupada, he took part in the International Book Fair, waging a virtual war against maya.

Srila Prabhupada’s instructions being his life and soul, empowered his vision, and amazing feats began to manifest. After the fall of the communist regime in Soviet Union, and the freedom granted to religious expression, he helped to establish many centers in the erstwhile Soviet Union.

H. H. Gopal Krishna Goswami Maharaja being an empowered representative of Lord Sri Caitanya, is engaged tirelessly in distributing Lord Gauranga’s mercy, and is one of the important spiritual preceptor who is fully devoted to fulfilling Lord Gauranga’s prophecy that "My name will be chanted in every village and town of the world".

At present, H. H. Gopal Krishna Goswami Maharaja is the G.B.C. for Mumbai, Northern India (that includes New Delhi, Haryana, Punjab, Uttar Pradesh, Vrindavana, Chandigarh), Mayapur, Kenya, Canada, some states of America, and many parts of the Commonwealth of Independent States. Also, he is the Chairman and Trustee of the Bhaktivedanta Book Trust, the world’s largest publisher and distributor of Vedic literatures.

H. H. Gopal Krishna Goswami Maharaja is engaged in inspiring and completing many of the largest ISKCON temples after the departure of Srila Prabhupada in 1977. Some of the important temple projects which have been completed under his untiring and dedicated efforts and directions include Sri Sri Radha Bankebihari temple in Nairobi in November 1994, Sri Sri Radha-Parthasarathi temple in New Delhi in April 1998 (also known as "Glory of India" project), 'Heaven on Earth' project in Mumbai in December 2003, Sri Jagannatha temple in Ludhiana on Balaram Jayanti, 2004, Sri Sri Radha-Govinda temple in Faridabad in 2007, Sri Sri Krishna-Balarama temple in (Punjabi Bagh) the western part of New Delhi in September 2007 and Sri Jagannatha temple in Ghaziabad in February 2008.

The "Glory of India" project in New Delhi, inaugurated by Sri Atal Bihari Vajpayee, the then Prime Minister of India, provides a multi-media visual display, a vedic cultural museum and an open air theater. Also, the 'Heaven on Earth' project in Mumbai is housed with modern facilities for imparting the essence of vedic scriptures to spiritual seekers, a mass feeding hall, a library with a reading room, a vedic samskara hall, besides a spiritually nourishing Govinda’s restaurant.

Besides, the bhumi pujana for Sri Sri Radha-Madana-Mohana temple in Khargar (Navi Mumbai), and Sri Sri Radha-Kunjabihari in Pune have also been accomplished. On June 1st 2008, bhumi pujan and ground-breaking ceremony has taken place for the proposed ISKCON center, Sri Sri Radha-Gopinath and Ashta Sakhis temple in Ludhiana. The total land area for the proposed temple is 4.5 acre. The Chief Minister of the State unveiled the curtain at the plaque and broke ground in front of the wall with a gold-handled plow. H. H. Gopal Krishna Goswami Maharaja also broke ground with another gold handled plow, to mark the beginning of construction. The Chief Minister lauded ISKCON's mission of systematically propagating spiritual knowledge among various sections of society, and its Food for life and midday meal programs to feed the poor with sanctified and nutritious food. The project would be called the 'Glory of Punjab', and would include a multi-media visual display, a vedic cultural museum, and an open air theatre. Additional land has also been procured in Kurukshetra and Vrindavana for expanding preaching programs.

Besides attracting thousands of national and international tourists and devotees, these temples are playing a leading role in spreading the divine message of Srimad Bhagavad-gita As It Is, spoken by the Supreme Lord Sri Krishna about 5000 years back, as also other vedic literatures. These temples are playing a leading role in college preaching, corporate preaching, as well as preaching in institutions like the Indian Institute of Technology (IIT), engineering colleges and many other management institutes, inspiring students, philosophers, academicians, politicians, intellectuals and even hard-core atheists. Some of these temples have stood first in the world in distribution of vedic literatures.

Inspired by Srila Prabhupada's instruction given to his disciples in 1974 that, "no one within ten miles radius of the temple should go hungry. I want you to immediately begin serving food", ISKCON centers distribute sumptuous Krishna prasadam on daily basis, as also on festivals. Besides, many ISKCON centers such as Mumbai and Delhi, are actively taken up to Mid-day Meal Program of the Government as a medium to distribute Krishna prasadam.

ISKCON, Delhi Mid-day Meal program is at the moment serving a staggering 1,75,000 meals everyday, feeding hungry children of Delhi, Noida, Faridabad and Kurukshetra. Very soon, the adjoining areas and cities would be covered under the scheme. United Nations - World Food Program has appreciated this noble program and has agreed to provide technical assistance. The Government of India also acknowledges these noble efforts and the State Governments all around want to expand this project to other cities of their respective States.

All these spiritual activities are just a glimpse of H. H. Gopal Krishna Goswami Maharaja’s deep commitment and surrender to Srila Prabhupada, his untiring, dedicated efforts, his selfless compassionate nature and inner conviction to spread the mission of Lord Caitanya Mahaprabhu globally.

Congregational participation is being encouraged in all spheres, and various goals are being established. In the C.I.S., His Holiness has had phenomenal success! Buildings have been acquired, book distribution is growing rapidly, Food for Life programs have been introduced, weekly seminars are being conducted, restaurants are being developed, regular preaching programs are being conducted in schools and colleges, and people are becoming favorable to the movement. Thus Lord Krishna's mercy is being distributed everywhere!

Other projects include youth cultivation programs, house programs in every corner of the world, and overseeing the translation, printing, publishing and distribution of Srila Prabhupada's books. Under his expert supervision, His Holiness has taken the distribution of books to the highest limits in the history of ISKCON! Maharaja goes to different temples, before the Marathon, to inspire everyone to distribute books.

H. H. Gopal Krishna Goswami Maharaja spirited enthusiasm makes even a skeptic pause and contemplate on his words. His aims are so clear! Many are overwhelmed by his selfless and compassionate intellect, as they strive towards becoming virtuous people. Even the subtlest concepts are explained with such admirable ease and patience.

Srila Prabhupada always admired his qualities of head and heart, and he once remarked, "Gopal is a very nice boy and he must be encouraged". Even hard core atheists are attracted to his graceful simplicity. Every encounter, every gesture and every answer brings out the inner conviction he has, in the mission he has embraced.

The International Society for Krishna Consciousness (ISKCON), popularly known as the Hare Krishna movement, is a worldwide association of devotees of Krishna, the Supreme Personality of Godhead. God is known by many names, according to His different qualities and activities. In the Bible he is know as Jehovah (“the almighty one”), in the Koran as Allah (“the great one”), and in the Bhagavad-gita as Krishna, a Sanskrit name meaning “The all-attractive one.”